Yay! Full moon weekend!!! (Almost…the full moon is on Monday. This is like the pre-mooning. So, consider yourself mooned in advance.) I’ll be posting two parts this weekend, so watch for the next part tomorrow sometime.  Post in the comments if you liked this, and if you missed previous parts…check out the tab up above. 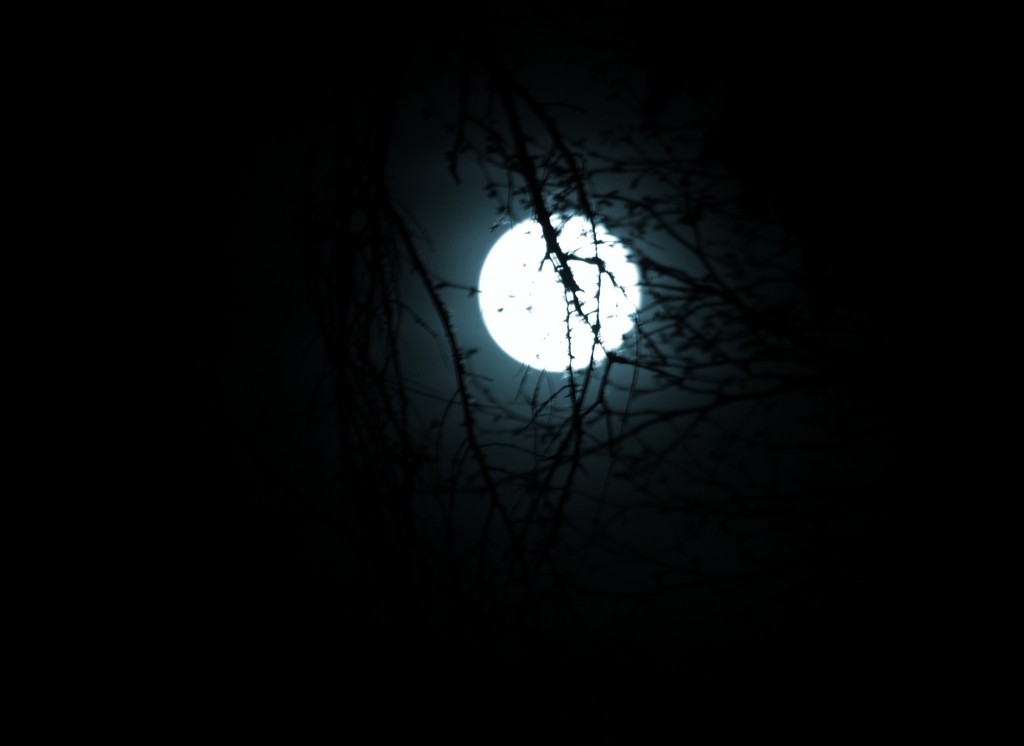 The Cold and Lovely Moon VI

I heard the tap, tap, tap like a faucet dripping but couldn’t place the sound.

Tiberius stopped immediately. “Aw shite. The helicopter.” He grabbed my shoulders in a too tight grip and stared into my eyes for a long moment before saying urgently, “Listen to me. You have to follow me. If you’re with me, I can protect you. I don’t have time to chase you. Even when we change in an hour’s time, stay near me. I will protect you to the death. Do you understand?”

I smiled. It totally wasn’t appropriate for the level of danger, but I’d never had anyone tell me they’d give their life for me. I felt very “hell yeah I understand—you’re mine.” I didn’t think he’d appreciate the sentiment, though—so I stuck with smiling.

His eyebrows drew together, and he frowned. Then his expression cleared as he must have realized why I was smiling dopily. “We’re mates. It’s what we do.” Every so often, the touch of an accent slipped into his voice…and it did with the word “mates” making it sound like friends and not lovers, but I could ignore that.

“Oh. Sure,” I said. The tap, tap, tap of the helicopter was getting louder, but we were having a moment, so I didn’t move.

Tiberius shook his head. “You’re going to get me killed.”

I shrugged, still smiling. “I’ll try not to. Maybe you should call me by name just in case.”

I could swear he rolled his eyes before he turned, grabbing my hand in the process and pulled me into a run.

And we ran. It was funny that the white coats had given us treadmills to prepare for running for our lives from them. I’m sorry, but that’s just poor planning all around. The ground we ran across was uneven, and we had to frequently jump over fallen branches and logs. The mossy forest floor was slick in spots. Yeah, if I wasn’t half creature, Tiberius would have just been forced to throw me over his shoulder and carry me or I would have been like a comedian in a room full of banana peels.

“I like being more coordinated,” I yelled to him, as we jumped yet another fallen log. He didn’t stop to acknowledge the booyah aspect to us leaping over two foot high logs, but I was really tempted to—maybe that’s why he kept tightening his grip on my hand.

Despite the ever-approaching slapping sound of the helicopters, he laughed. “The only time I’ve experienced real, gut-eating fear this whole time was when you were on that treadmill.”

“Shut up,” I said again. Mostly to acknowledge it was an insult. Now that I wasn’t clumsy…it was like I was seeing how the other half lived, and I couldn’t go back. Five minutes later, I added, “I’ve got more stamina too. I’m not really even tired. I swear I could do this for hours.”

“Uh huh. And I want you to think those exact words when you’re holding onto this ridiculous no sex before I say your name shite. My uhh…stamina has increased with every moon.”

“It’s not ridiculous!” I chose not to comment on the other portion of his statement. In fact, I wasn’t even going to think about it. I was going to ignore the crap out of it. Because I honestly couldn’t care less if he saw himself as some sort of Egyptian god super stud. Half the guys I dated had been like that. Well, not the Egyptian part. That would have been weird. Well, only because I don’t think they’d stopped to define it. I mean, even if, chances were, that Tiberius was right—I was more right about wanting to hear him say my name. “I don’t think it’s being unreasonable to….”

“You not saying my name…may not become as much of a factor in whether or not we have sex as I thought it would.” I ruined the effect by tripping.

Tiberius spun and caught me with his hands under my arms. “Are you okay? You’re okay.” He set me back on my feet and grabbed my hand, and we started running again. It all happened in a matter of seconds.

Wow. He had some awesome reflexes too. I wasn’t about to tell him because his ego might pop if it got any bigger, but…

The snap of the helicopter was close enough that it sent a rush of fear through my bloodstream. I could smell it. I could smell I was afraid. Fear smelled gross. I thought that white coat last night just had some sort of body odor issue, but fear smelled like the worst sort of sweat.

“We need to get out of sight,” I yelled.

In the distance, gunfire sounded like metal hail, and we both stopped and looked back.

“Must be those deer we passed,” he said under his breath, even as he pulled me back against his body, wrapping his arms around me.

“We need to get out of sight,” I said again.

His arms dropped, and he grabbed my hand again…and we were running again…for our lives—again. I felt all that much colder for having felt the warmth of his body against mine for a second.

“No, remember I told you, I’ve lived with criminals getting their bachelor’s degrees courtesy of the government. There are a few ways to hide from infrared. Uhh…glass.”

“We’re in the middle of a forest! Holy shite, woman, why not wish for our own helicopter while you’re at it?”

“Okay, how about water? It can’t be freezing water, but that lake I washed in would be warm enough.”

“Uhh, we’re on the other side of that lake. If we head east, we could make it there in about fifteen minutes I think, but if you’re wrong, we’re sitting ducks…like…literally.”

“Go! I’m sure.” He changed direction, and I found a little more energy to increase my speed, and also to say, “We’d have to be ducks for it to be literal.”

He growled over his shoulder, and it didn’t sound so different from when he was a dark beast or whatever. Hey, I’m not a huge rah-rah fan of the English language, but people who misuse literally—literally make me get all ragey. I’d got thrown in solitary confinement once for what I thought was a perfectly rational reaction in a similar scenario.

I don’t have many rules. Only use literally when you mean it. No beating on women, or I run you over with a car—twice. And I’d like to be called by name when we do the deed. Three rules. That’s it. Those were outside the scope of shirtless chin-ups.

“How long until we change?” I asked. I’d moved much faster last night. Whatever I was, I was fast, and I could maneuver much better.

“Half an hour, but we’ll still be warm-blooded.”

“If we can find a cave or something under rocks or underground that might work for keeping out of sight for longer.”

“I think there are some bear dens around that might fit that description.”

“Won’t they have bears in them?” Having a giant bear rip me to shreds didn’t rank high on my list of fun times.

He tossed me a grin over his shoulder. “You let me worry about that.”

How he could still be smiling at me when the helicopter was coming closer and had just slaughtered Bambi—I didn’t know.

I could smell the water as we approached. The water had a sweet smell. I could also smell salmon swimming in it. The salmon we’d had for breakfast felt like a long ago meal…and the berries Tiberius had picked and handed back to me as we were walking couldn’t compete with how much energy I was expending being thoroughly freaked out.

When we reached the lake, and Tiberius started wading in, I found the fatal flaw in my plan—literally—and I know when to use the word literally.

When I didn’t follow, he looked over his shoulder. “What? Are you afraid of the water? Hurry!”

“What do you mean you can’t swim?” he asked as he sloshed back out of the water.

“Why did you suggest this….oh, to hell with it,” he said as he picked me up and dragged me back with him into the water.

I put my arms around his neck. “I told you I have a lot of theoretical knowledge. They don’t exactly have a pool at the women’s penitentiary believe it or not.”

He was wading in the waist deep water toward a bunch of reeds and where tall trees overhung the lake.

I could feel the panic in me rising with the water around my body.

He broke off two reeds when we were far enough in that he could let go of me. “Okay, so you’re going to calm down because I know what I’m doing and you’re going to stick to me like glue. We’ll use these to breathe through and wedge ourselves under that tree’s roots right there so we won’t float.”

I scrunched myself closer to him and pressed my face against his neck. “Maybe you should have let me run off. I am going to get you killed.”

The water was at his shoulders, but I would have been up to my eyeballs if not for the death grip I had on him.

I obeyed even before my brain processed it.

He was staring at me in that hypnotic way of his. “We are not going to drown.” He held up the reed. “See. Hollow.” He put it up to his mouth and blew through it. “All you have to worry about is breathing through this and keeping that end above the water. If a little water gets in it, just blow it out. Okay?”

I nodded. In theory, sure, that sounded great. Plus, when he stared at me like that, I might agree with anything. Hopefully he never realized that.

“I’ll hold you down there so all you have to worry about is keeping your reed out of the water.”

“You’re holding me underneath the water?” I couldn’t keep the “you’re going to drown me” note out of my voice.

Oh, that sounded much better.

“We only have to stay under until we change and then we’ll go kick a bear out of his house, okay?”

He yanked me under the water, and I pulled the reed up to my mouth and closed my eyes tight. A minute later, my side was pressed up against a thick tree root, and Tiberius had wrapped an arm around my waist and his legs around mine. This was insane. We were so going to die.