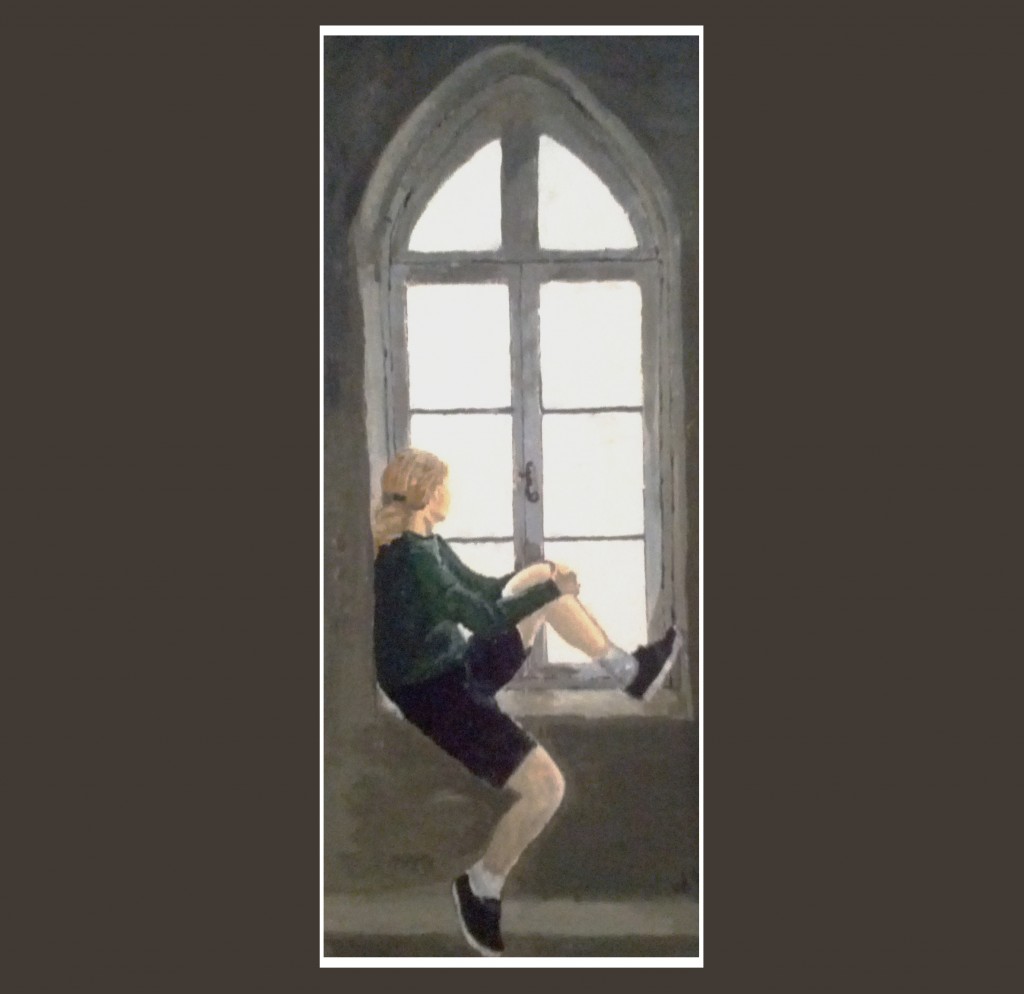 This is my third post on OCD. I also posted on OCD and Dark Thoughts and OCD and Cutting.

Agoraphobia is defined as anxiety in situations where an environment is perceived as being uncomfortable or dangerous. This may manifest itself as discomfort in wide-open spaces or in crowds. It was once believed to be a subset of panic disorders, but the latest diagnosis criteria (DSM -V) distinguishes it as being its own disorder because many with agoraphobia will go to great lengths to avoid those environments including refusing to leave their homes. (For more information, please see the Wikipedia article on the subject: Agoraphobia which is where I drew my definition from.)

Right in front of my door there is an invisible wall that separates me from the contamination outside.

Contamination is my strongest Obsessive Compulsive Disorder issue. Most people see me as a germaphobe…and if you see me handling food and the number of times I wash my hands, it makes sense. If you see me recoil from someone sneezing, the label would seem to fit, but it’s not accurate. If I can’t see contamination, it doesn’t bother me. If I don’t suspect contamination, I’m fine.

But the label contamination is more encompassing than just germs. I can’t have anything on my hands or they’re contaminated. I especially can’t be around someone visibly ill because body fluids are contaminating. I can’t stand the feeling of my own sweat when my OCD is bad–which is a vicious twist because running helps my OCD. My husband knows to let me initiate kissing because that’s some serious contamination–which is worth it–if my OCD isn’t too strong. I wear gloves when I handle certain foods: peanut butter, tuna fish, dough… If it can get under my nails, potentially, I wear gloves.  If it can make my hands smell beyond one washing, I wear gloves. My OCD has progressed beyond me being able to handle raw meat so I don’t anymore. I used to be able to, but not anymore.

Whenever I’m making food…I wash my hands in between every step. For example, making blueberry muffins the other day:

–Wash hands to wash off juice of blueberries

–Wash off specks of liquid resulting from whisking

–Wash off batter from scraping sides of bowl

–Wash blueberry juice off my fingers

Then, comes putting the batter into the muffin cups…where I have to wash batter off my hands at least every other cup.  I made 18 muffins. I washed my hands at least 18 times. The only time it was for germs was with the eggs. So, that would be the directions for that recipe–OCD style.  Which is sort of funny, in my opinion.

My mom says I was like this as a child. I’d cry every time I got anything on my hands.

Contamination is also the reason I hate going to the doctor’s. My current doctor, when my OCD was really bad, would have them move me into a certain room the minute I arrived because the waiting room made me wig out. He still caught me one time wiping down his counter, but it really looked possibly maybe questionable. I saw some dust…in one corner…near the pamphlets. I like to think he was moving me into a room for my benefit, but the truth was probably that my twitchy paranoia likely freaked out everyone in the waiting room.

Contamination is internal too. It’s the reason why I’ve been struggling to go to church the last few weeks. I’ve been attempting to cut out an OCD med and my OCD is worse. So, the dark thoughts are stronger…they’re inside me…the voices are louder. I’m too contaminated to go in the chapel.

My kids are never contaminated…because they’re an extension of me. If they’re spewing body fluids of any kind–I just need to clean them off very quickly so they can go back to not being contaminated.

Crowds are very contaminated. Crowds where people might be sweating….that’s just foul.

If you’re reading this and thinking, “Wendy, this is somewhat ridiculous.”

It’s completely and utterly ridiculous. That is a qualifying significance to OCD…we know our behavior is ridiculous. Our paranoia is illogical. Our attempts to reconcile one thing in our life with repetitive behavior or avoidance make no sense. Most people with OCD have average or above average intelligence. We KNOW this is senseless, but the hell of OCD is that we know, and yet we wash our hands; we stay inside; we cling to certain numbers, certain behaviors. We have to, so we can sleep; so we can function; so we can fake normal the rest of the day.

Yesterday, I went to the Renaissance Faire even though it was very contaminated because I want my kids not to be forced to live in my world with its invisible walls.

Today, I went to church because I believe that God wants me to be there–to walk through my invisible walls. I like to think that it means something more because it’s harder–and, today, it was very, very difficult.

My husband drags me outside if he thinks my wall is getting too thick. I force myself outside for my kids so that the wall doesn’t get too thick. And I know there is no wall…and yet….it’s there. Stepping through it makes my heart beat faster, makes my skin itch, makes me long to just go inside and never leave. I hesitate, and then I push through because I don’t want to be that person, but I hesitate because I am that person.

Do you want to hear something crazy in the world of contradictions? I love to travel. I love to see new places, to soak in the culture, to eat different foods. I love it. I think that’s part of why I write. I can go anywhere, be anything, do anything, and I never have to break through that invisible wall.

When I tell new people I have OCD, do you know what their number one response is?

I doubt you’ll guess it….

Because it makes less sense than everything I’ve said above.

Their number one response is: So do I.

I have to have everything a certain way.

Do you know how I know they don’t have OCD?

Because most people who have OCD couldn’t put it so simply. It’s not just one little quirk. It’s a dozen things that slowly eat up the hours of your day and sometimes keep you inside just a bit more.

In addition to everything mentioned above, I also can’t go anywhere if I don’t know where I’ll park when I arrive. I have to know where I’m going to park, and it can’t mean parallel parking–I don’t parallel park. My husband has to figure out a parking plan for me or he knows to meet me somewhere so he can take over the parking thing. This summer, I’ve met my husband at the end of his hour-long commute home twice–just so he can turn around and drive me back to an event a mile from his work.  He can’t anticipate the parking or I can’t handle the drive. Twice. Having to be in a crowd outside is asking a lot of me–and I generally can’t sleep the night before or the night after–add in parking and I’m a mess for days.

Until your entire life revolves around what you can handle and what you can’t; until you’re beating up against some invisible wall or trying to force yourself not to enact behaviors that accomplish nothing; until your hands are raw from washing them or you’ve ruined a joint with a repetitive nervous tic–you don’t have OCD. Until then, you’re an individual–you’re unique–you’re quirky–and that is what makes you interesting, not what makes you labelled or dysfunctional. Until it traps you, you don’t have OCD.

Every time I post about OCD, it builds up my invisible wall. I feel open and exposed, and I want to stay inside a little more and hide. I sort of want to hurl too. But my daughter has OCD and deserves to live in a world where she doesn’t have to be ashamed of it, and I desperately want her invisible wall to not be as strong and present as mine. My son has agoraphobia. My husband drags him through his invisible wall sometimes too. My son hates it as much as I do…but then he has fun, and I have fun, and life wasn’t meant to be lived inside a cage built of invisible walls.

If you have agoraphobia, find something worth challenging it. When you look back at your past, you’ll remember the times you’ve left your comfort zone, not the trapped times. You’ll remember watching a rat circus, not the feeling of drowning you first experienced when you left the house. And it sucks–this invisible cage, and I’m sorry it sucks. I’m sorry it sucks for you and for me, but it’s only a cage if you see it as one…until you do, it’s still invisible. And anything is possible once you step outside your door, and life was meant to be lived.

I won’t lie and say I manage this all that well. Every day is a fight. Sometimes, I win–ish. Sometimes, I lose–hard. I can’t say I go outside as often as my husband would like…but he’s patient and he must sort of love me because he lets me stay inside to regroup and then drags me out so I don’t get too comfortable.

By the way, if you ever respond to someone telling you that they have OCD with “So do I” and you don’t really…just know that in their mind they’re Jedi force-choking you while still smiling, but they’ll probably forgive you. But, seriously, don’t do that.

If you have OCD or agoraphobia and you want to talk, I’m always on Twitter and, if you give me the heads-up, I can “follow” you and we can discuss it in DMs. Or you can contact me via the email address on my contact page.  And now I’ll post this and go toss back some Zantac, Mtn Dew, and finish it off with some Oreos…because I’m healthy like that.