So, this is a speak now or forever hold your peace (until the next full moon.) I’m planning on posting something else tomorrow….

Also, it’s just nice to comment regardless. You should comment. There’s a spot right there below. See! It says comment. You should view that as a command. 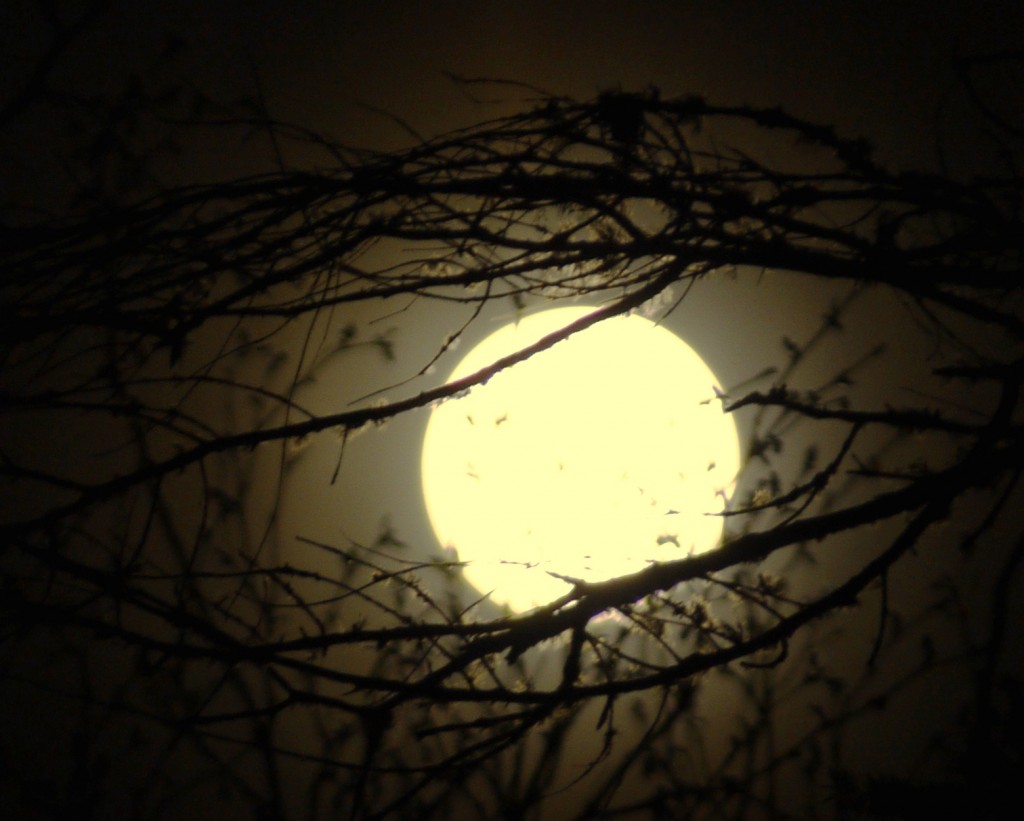 The Cold and Lovely Moon IX

I woke up under a soft quilt this time and, for a moment, it confused me. There was a hard ground beneath my naked body, and the whole place stunk of something wild, but I had a cotton quilt covering me. Light from the entrance to the cave streamed across a pile of clothes in front of me, a few granola bars, a bottle of water, and a pack of raisins. It all came back to me. Last night. The bear. Tiberius. All of a sudden, the quilt was made of lead.

The rustle of paper caught my attention, and I sat up, shading my eyes.

Tiberius sat there consulting a map. He was already dressed and looked alert—like he’d been awake for hours.

“What time is it?” I asked. My throat felt scratchy from tears, and you could hear it in my voice. Hopefully he just assumed it was my morning voice.

Whoa. “It took me that long to change back?”

“No, you changed back several hours ago, but I didn’t see any reason to wake you.” The unconcern in his voice was as damning as his words. Maybe he’d been polite and considerate about letting me sleep in, but he was also making it fairly clear he didn’t need my help by doing it.

He didn’t even look up at me as he said it. It felt more shameful than a one-night stand. And, hell, he really might not remember my name either so maybe it was an accurate reaction. I almost didn’t want to put on the clothes he’d stolen for me. It felt like money left on the dresser. Here, in exchange for worshipping me and cowering before me, I bring you food and clothing, woman.

This wasn’t going to work and, despite my best intentions, there was enough of a wrenching and twisting feeling in my chest to let me know I’d gone and fallen for a guy who saw me as a possession.

I grabbed the shirt anyway. Being naked left me at a disadvantage, and I needed every bit of self-respect I had to walk away from Tiberius when the time came. Even in the dim light, I could see a fly-fishing picture and the words “Catch and Release” on the front of the shirt. If anything could be funny this morning—that would be.

I swear Tiberius can read minds or I was just putting off enough of an injured air that he said, “We can’t have the sort of relationship you want.” He still didn’t look up.

Yanking the t-shirt on, I said, “One filled with mutual respect? Yeah, believe it or not, I got the subtle hints of that last night.”

“No, you wanted to be in charge and disrespect my position, and that’s not acceptable terms among our kind.”

There was a pair of underwear there, but wearing some other woman’s underwear when I felt this crappy was too far. I’d go commando. I might have felt embarrassed standing to pull on the jeans—if I’d thought he was interested in that with me—if he’d been the guy I’d kissed yesterday, but that guy was apparently dead and buried under this new Tiberius. “Well, it’s fine because I’m not really intending on being your kind. I followed you last night out of respect because I did respect you, but that was the last time.”

I heard him set down the map just as I yanked the jeans up. Oh well, if he’d seen anything it was the only time he’d be seeing anything so he deserved knowing what he’d tossed to the side on this ego trip.

I gave him a long look…met his intense stare with my “screw you—I don’t care” expression. “We’ll see.”

“I can insist like I did the first night.”

“No, you can just kill me and then see how great it is having a corpse to show for it. I imagine I’ll follow you great then.”

We kept staring at each other, waiting for the other to break first. His jaw tightened. He’d trimmed his beard somehow and shaved somewhat to keep it neat. His hair didn’t appear to have seen a comb, though. That was Tiberius. Part man. Part monster.

“I brought you breakfast and clothes,” he said.

His words made me sigh. It was like trying to explain to a toddler you can’t just punch people and have it be okay. He couldn’t see the problem in how he was behaving. He couldn’t buy me with gifts and expect me to be a pathetic little fan-girl. But I wasn’t going to explain it to him when it wouldn’t matter. The next time he gave an inch and I took it, we’d be back to this.

“Thank you,” I said. Someone at some point in my life had taught me to be polite. I’d been in and out of so many relatives’ houses that, obviously, it took a bit to dredge the ability up, but it was there.

He sighed this time and dragged a hand down his face. “You need to understand how dangerous it is if I’m not seen as being wholly in charge—if I’m seen as weak.”

“Yeah, I might get ideas…like maybe I’m worth something to you.”

“No, I mean like, last night—other creatures sense that balance of control. Wild creatures. Dark beasts. We can tell who is in control in a confrontation, in a relationship. The bear. Our clan. If the clan sees me as being whipped by a woman, they won’t trust me when I tell them they’re in danger.”

“Since when does being respectful equal being whipped?” He’d thought he was acting whipped? He’d been nice…reasonable…someone I could see myself being with. I saw whatever weakness he had for making me happy and his worrying about me as a sign he cared about me. He was acting as if treating me better than a favorite pet was a character defect. And, I was a little worried he didn’t see a difference between a confrontation and a relationship. That would explain a lot.

“Wild things know who is in control. Power has its own scent and feel. For everyone’s sake, I need to be alpha.”

“So, you can’t let up on that leash for a second I guess.” Not when we’re alone. Not even when we’re sleeping.

He gestured at the front of the cave. “If I didn’t seem to be in control that bear would have come back and killed you, woman. If I’d given an inch, it might have slashed you on the way out.”

Okay, so there were a few things wrong with that thought—even besides the fact that I winced every time the opportunity to call me by name slipped by. “I wouldn’t have blamed him. You’d just attacked him in his home.”

His mouth dropped open, and he threw his hands up in the air. “First the white coats and now a bear? I thought you wanted to be safe.”

“There weren’t any helicopters out there.”

“That wasn’t a guarantee.”

“So, this could have been a back-up plan for if we heard helicopters.”

“Holy shite, woman, did you stop and think that maybe a bear running away from here might have raised their suspicions?”

No. Not really, but still… “Then, why did you lay out there in plain sight if you were worried about that?”

“So, that nothing would come in and kill you in your sleep.”

And I almost gave up and gave in a little…I was so close…but then he opened his mouth and kept on going.

“Hell, woman, you are the most stubborn she-beast. It’s like you don’t lose any of the beast when you turn back. You’re obstinate, aggravating, and I can’t talk sense into you.”

Yeah. Nice. Speaking of turning back…. I turned my back on him and sat down to eat my breakfast. It tasted like cardboard and the smell of bear made everything taste a little gross but, hey, if he felt like he could buy an ego boost, I was determined to prove him wrong.

He got to his feet and came over and crouched in front of me. “You’ll need to hotwire a vehicle. An old SUV. Looks like it’s from the eighties. You said you could do that.”

I swallowed the granola bar. I wasn’t sure if this was a concession on his part of not. It was difficult to say. It wasn’t an apology. “Theoretically.”

“Well, theoretically, how long would you need to do it?”

“It shouldn’t take more than a couple minutes.”

“I don’t think this trail head is used very frequently, and they’d packed for a few days’ hike. They shouldn’t be back until we’re well and gone from here.”

“We’re leaving someone stranded in the middle of nowhere?”

He scowled at me.

“I’m sorry if I don’t feel like strangers deserve to die so we can have some transportation.”

“We’re not in the middle of nowhere. There’s a gas station one mile up the road, and they had food from there so they know that.” And on that note, he got to his feet and walked off—straight out of the cave, without looking back, and I know because I turned to watch him go.

This was never going to work.

If you liked that, see my books page or check out my shorts…not those shorts…the free ones in the tab above. Also, you’ve probably figured out what’s odd about this serial with the rather large clue in the “what’s in a name?” title, but if you haven’t…this would be your last chance to ponder on that. Ruminate the crap out of that.