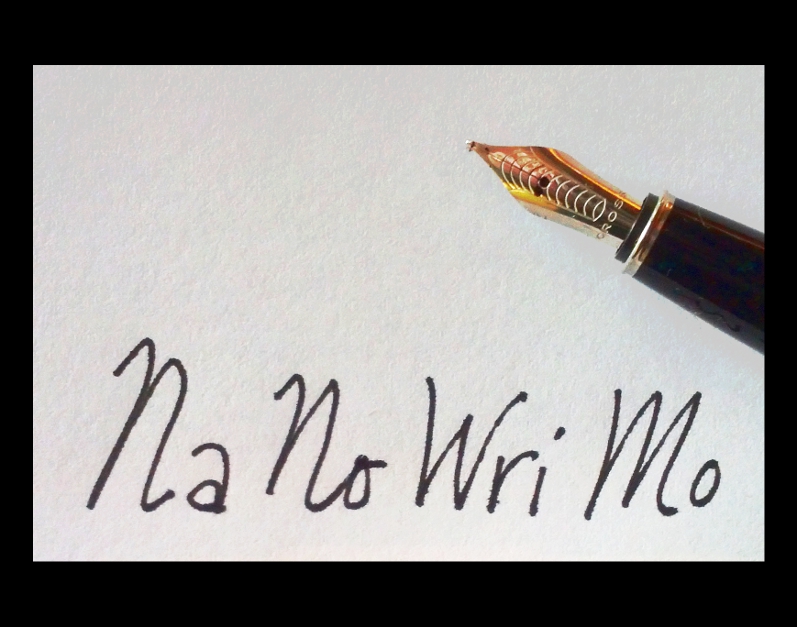 If you’ve had a long enough interaction with the Writing/Publishing community, you probably know that during the month of November, a certain insanity overcomes many good, decent people…people you might pass on the street. They become slobbering, blathering maniacs fueled by caffeine and…even more disturbing…the creative juices.

Wait…as an aside…what the crap are creative juices? That sounds a little gross. You know how I feel about body fluids and contamination. I’m pretty sure I opted to go with creative…vapor when they were handing out creativity.

Anyway, November is National Novel Writing Month where hordes of writers attempt to punch out 50,000 words in a single month. (For comparison, the first Harry Potter is around 77,000 words.) If you manage it, you get bragging rights and a “win.”

This will be my fifth year. I compete every year…no matter what insanity I’m trying to work through. Last year was insane. Last year, I had a crazy amount of stuff going on. I actually write more when I’m stressed out, so I stopped sleeping and wrote instead. I just had to get out of my life–so I did–every night for about four or five hours. I wrote two novels.

This year, life is much better, but I still have a ton of stuff going on. So, instead of working on novels, I’m doing novellas. I’ll still crank out 50K, but it’ll be in novellas. The reason I’m going with novellas is that I can take breaks despite my obsessive writing issues where I can’t stop writing until it’s done. I can’t go down that rabbit hole this year. I’ve got On His List coming out and possibly something else. I’ve got final passes on various projects. I also want to do some submissions. I just can’t pull what I pulled last year…besides the fact that it was scary. *sighs* Have I mentioned how bad 2012 was? I have? Like a dozen times? 2012 should die in a fire. True story.

I’m at 6,055 words. They’re not great words. NaNoWriMo is about getting words down. This is a draft. This is a very weird little story thus far in fact. Very weird. I’ve been giving myself an hour here and there to write as incentive to get other things done, and it seems to be working. I’ve actually done quite a lot besides write. I think last year’s insanity fueled words were better, but *shrugs* it is what it is…and I’d rather be sane. Well, sane-ish.

Hey, you want to read a bit of this quirky little weird thing?

Sure you do. Of course you do. Here it is:

The door to the master bedroom flew open.

“And another thing,” Reece said, stomping into the main room. “You’ve got to stop whistling.”

He stood there blinking at her. Whistling? His whistling annoyed her? “You don’t like whistling?”

She shifted on her feet. “It…bothers me.” At the last second, she wouldn’t meet his eyes, and her cheeks flushed pink.

Oh, well, that was good to know. Apparently, it bothered her. “I’ll try to stop.” But not very hard. “It might be difficult.” Especially since he intended to bother her quite a bit.