Home » Books » Cursed and Not Cursed

Cursed and Not Cursed

My novella Cursed by Cupid comes out on Monday–just in time for Valentine’s Day. Woooo! Wahoooo! Here’s the cover for you to Oooooo and Ahhhhh over: 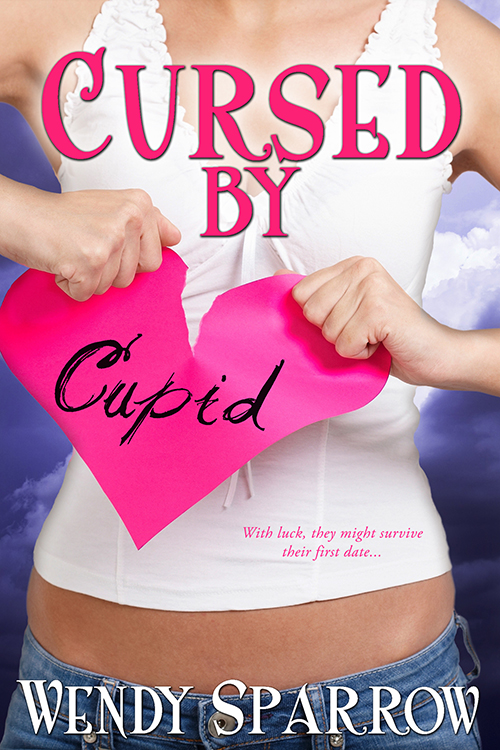 Dear Reader, this letter is to inform you of Cupid’s curse, which will fall upon you if you don’t pass this email on to three friends within three hours.

Tilly Morrow didn’t believe in the curse and now she hasn’t had a second date in three years…because all her first dates end in disaster. In fact, she just accidentally punched a guy in the face, leaving her without a date for Valentine’s Day!

Bryant Murphy isn’t sure if the curse is real or not, but if dating Tilly means occasionally getting assaulted with a chocolate shake or nearly electrocuted, it’s worth the risk. Armed with more lucky charms than a bowl of cereal, Bryant will have to battle flying swords, Russian mail-order brides, and shrimp linguini if he’s going to win the girl.

You can run there right now and check it out, but I’ll do a longer, more-detailed post on Monday to remind you. Hopefully. Maybe Monday night.

Secondly, I’m totally not cursed…which is funny…because I thought I was. Last Friday, we were getting ready for my husband to go on a week and a half long trip to Germany…and my car started making really strange noises. (It turned out to be a rock caught in between the wheel and brakepads.) And I got home just aggravated and wanting to throw things because I felt like things always get more stressful with my husband’s trips and everything that can go wrong–does. And I got on Twitter to whine about being cursed and got distracted and got off without telling everyone that I’m horribly and completely cursed. Which would have been funny.

But then my mood didn’t improve because my husband was late getting home because I remembered he had some sort of “work thing.” So, I was outside getting firewood because nothing improves my mood like a fire, and the husband got home. He walked over and said, “You didn’t respond to my texts.”

I pulled out my phone. “What texts? They didn’t come through.”

He smiled and said, “The ones saying we’re going to the Superbowl.”

And I stood there staring at him and asked, “What?”

Even after he explained his boss had given him a trip to the Superbowl in recognition of all the work he’s done for the company, I still asked, “Really? Wait…like…really?”

He’d been waiting for me to respond because he knows with my agoraphobia that crowded places are hell for me…as is leaving the house, but…going to New York for a trip and to see the Superbowl? Uhhh…I think I can take a whole lot of meds for that! A whole lot of meds. So many meds.

Most of you might think, “Well, that’s a dream come true, Wendy.” And let me clarify that it’s not…it’s sooooo not…because I only “dream” about things that are actually remotely possible. Me going to the Superbowl and New York is so far out of the realm of possibility that I still don’t believe it. My life is more about paying off astronomical power bills and wondering if we’ll ever get out of debt from the kids’ therapy. I was never going to be able to go to the Superbowl. And now I am…and it’s so surreal.

We’re staying in a super-nice hotel near Times Square.

We’re flying there in a chartered plane.

We might be at an after-party…like a serious after-party with like people who aren’t rural housewives with agoraphobia–who I might recognize from TV–like TV…that box that displays pictures of people with lots of money, but that’s just too weird for me to even think about…so I’ll have to tell you if that happens.

My hands won’t stop shaking, and my heart meds can’t keep my heart rate down, and I’ve been this way since Friday. And, I won’t lie, there’s a bit of horrified terror mixed in with the disbelieving excitement, but still…it’s the actual Superbowl.

Maybe this is a dream. You know like a weird dream. Like that dream where you find out you’ve missed a class for all of high school somehow so you can’t graduate…at 37 years old…but instead it’s the Superbowl…and you’re going. Yeah, I’m pretty sure that’s it.