An Interview with Jack Frost

This originally appeared on Grave Tells a year ago: Check it out there. 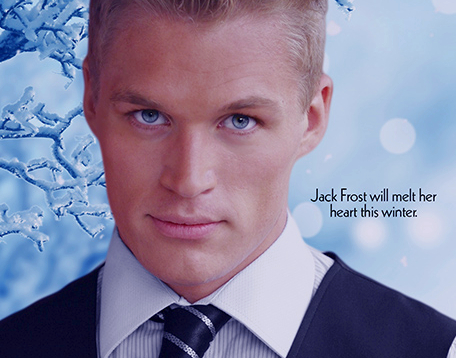 Interview with Jack Frost of Frosted

When you’re trying to sit down for a chat with the king of winter, you’re really working on his timeframe—especially since Jack Frost can only be in an area where it’s been below freezing recently, and Seattle isn’t exactly known for its cold weather. So, I requested Jack’s presence on the 16th of December in a hot chocolate bar in downtown Seattle…just days before the timeline of Frosted’s actual events—of course I didn’t know that then.

Jack Frost has a presence even if you don’t recognize who and what he is, so when the door opened and blew in an arctic blast of air, all the patrons huddled around their heated beverages at the little café tables but then everyone looked at him. Jack is that way. He’s over six feet with blonde hair and blue eyes and, to me, he’s always looked like a king of someplace.

When he saw me in the corner near the heater vent, he went to the counter and ordered—a stiff smile in place for the barista who blinked at him owlishly as if trying to place him. His self-assurance implied he was important and famous. Of course, no one in the place but me knew he was most well-known for nipping noses.

Actually, he doesn’t do that.

Well, not to just anyone.

And if you mention the song, you’ll be digging your car out from under a blizzard every day for a week.

He gestured my way, and I got the impression he was asking the barista to bring it out. I appreciated that. It only took a single handshake for you to realize you didn’t shake hands with Jack Frost. It was a good way to get frostbite…and not that kind of bite. So, the walk from the counter to the café table would have left my hot chocolate a chocolate shake if he’d carried it. There are downsides to freakish amounts of power.

“So, how are you?” he said on a sigh as he dropped into the seat across from me.

“Did you get whipped cream?” I asked instead.

He raised his eyebrows with a look so glacially regal that I shrugged. Of course he’d gotten me whipped cream. “I also had them put sprinkles on top. I know how Seattle is about sprinkles in the winter.”

He almost smiled. It’d been seven years and even though Jack is immortal—he looked aged. Seven years ago, he’d had this careless amusement to him. Now, he was different.

The barista came out and set the hot chocolate in front of me, and I inhaled. This was almost worth going out into the cold. Almost. I tugged my coat tighter around me.

“You need a better coat,” he commented.

“Well, I don’t exactly plan on going out into the cold. Ever.”

He shook his head. “Do you have any idea the amount of planning a day like yesterday took? Every snowflake individual. Everything orchestrated. The fae were indignant I was sending them to Seattle just to nudge it to freezing for a day.”

“And I can enjoy it just as well from inside my house—under blankets—with my laptop.” I could feel the cold emanating from his skin beneath the table where our knees were a foot apart.

“Did you even look up from your laptop to appreciate what I did?”

“Of course I did. The ground was all…frosty.”

He laughed and, for a moment, he looked like the old Jack Frost.

“How are you?” I asked before taking a sip of my cocoa. I had to lick off a moustache of whipped cream, and I was so involved in the sensual pleasure of good hot chocolate that I didn’t notice at first he hadn’t answered. When I finally looked up and met his eyes, I looked away from the conflicted emotions I saw there.

We both looked out the window nearby. Those in Seattle don’t bother with umbrellas, not if you’re native. It never rains that hard. But even the threat of frozen precipitation sends us into a panic, and I watched as everyone slung concerned looks at the sky. It did seem to be darkening by the minute.

Out of the corner of my eye, I saw him glance up. “Damn.” He turned to face me, and the clouds receded as he gained control of whatever emotions had drawn them here. “Do you know what scares me? I’ve never known fear until recently. I didn’t know I could feel it.”

I swallowed thickly. When an immortal mentioned fear…well…you listened.

“Time,” he said finally, sitting back and shaking his head. “After centuries, the one thing I thought I had in abundance has become costly. I feel it in the drip from every icicle. I heard it in the first drop of spring rain over the last seven years. Tick. Tick. Tick. The damn clock is running out and hell if I can’t do a thing to stop it.”

I hesitated to mention her name…since the sky still looked threatening. “So, Kate…?”

His jaw clenched tight. “Kate.” The way he said her name with both reverence and aggravation was the tip-off. Seven years and his queen was still on the run. “You’ve heard the mortal idiom: if you love something set if free?”

“It should be: if you love something—chain them to your bed in the winter world because it’ll only end poorly if you marry them and set them free.”

I fought a smile. “Well, that’s touching. That should be embroidered on a pillow.”

He snorted a laugh and shook his head. “She is just so…so…” He gestured in the air. “Kate.”

“She is very Kate,” I agreed. What was I supposed to say? At least the storm clouds outside had dispersed.

“So, what did you wish to discuss?” Jack was never one to wear his emotions for long—not with me, and he sat up and wiped his face clear of the frustration and longing that had been there.

I’d wanted to ask about his plans for Kate. Their seven year wedding anniversary was coming up at the winter solstice. Now, that seemed…idiotic. No one in Seattle would thank me if I sent us into a blizzard in mid-December by aggravating the king of winter. No one in Seattle can drive in the snow and, as he’d mentioned, I wasn’t dressed for it to drop below freezing again.

“I wanted to ask your opinion on a Jack Frost joke. I’m thinking of putting it in that book I’m writing,” I improvised.

He groaned, but didn’t look overly pissed. “I swear on the fae, Wendy, if it’s that damn ‘by icicle’ one again…”

“Noooooooo,” I assured him. It had been, but luckily I knew a few more.  “What happens when Jack Frost and a vampire get into a fight?”

He stared at me…and then said, deadpan, “You do know there’s no such thing as vampires, right?  They’re a myth.”

I rolled my eyes. “Frostbitten. Get it?”

He got it. He disappeared a moment later. And I breathed out a sigh of relief. At least I hadn’t asked him anything else about Kate. He reappeared and slapped a ten dollar bill on the table. “For a tip. And a tip for you: buy a better coat because you’re going to need it.”

Then, he was gone again.

When the temperature dipped again less than a week later, on the winter solstice, I wasn’t sure if it was a good or a bad sign, but I did get the feeling he’d managed to get his queen back into his grasp.

For their story, you’ll need to read Frosted, and when the thermometer drops, I would apologize, but now you’ve met Jack…getting frostbitten might not sound as bad.