Home » AmReading » The book was better.

The book was better. 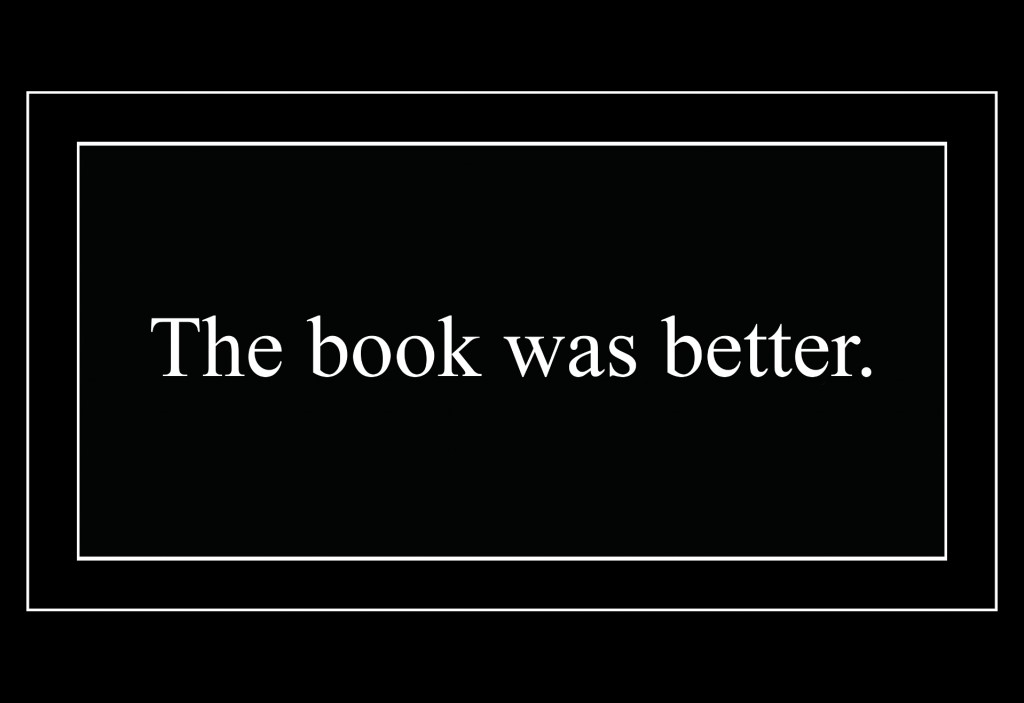 I have the sentence above on a T-shirt, and every time I wear it, it elicits comments, but probably not what you’d suspect…

There’s no trademark or anything else. Just those words.

And people stop me to ask, “You’re talking about *insert movie name* aren’t you?” The most frequent guesses are Harry Potter and Twilight. (I bought my daughter the same shirt, and she answers yes if you guess Harry Potter.)

What is it about books and movies that this becomes a universal thought? How many movies can you name that were better than the book?

These are my theories on why the book is better:

1. Reader Expectation. I think this is the number one reason. Some of you reading this may be too young of whippersnappers to remember when the Harry Potter movies were cast. (Because, you know, Harry is all grown up and starring naked in plays, and Neville turned out to be the hot one–who’d have guessed? Me. I did.) When Harry Potter was cast, I can remember utter outrage at one of their casting choices from everyone I knew. Hermione. Her teeth weren’t prominent enough, and her hair wasn’t as awful and unruly as it should be. She was just plain too cute. How dare they? The readers had grown to love Hermione with her perceived flaws and they didn’t want her Hollywood ungangly…they wanted her to look like they’d pictured her. Exactly like they’d pictured her–because, you know, that’s possible. Readers flesh in a visual of everything and then expect the movie to follow suit.

Readers also don’t want to lose anything from their favorite book and they sometimes want the movie to be a duplicate, not a replacement. It’s their FAVORITE book. Why must Hollywood mess with it if they can’t get it right? But of course they should get right not just that reader’s “right version in their head” but every reader’s right version. It’s a tall order. Many movies are presunk on this point because readers begin by thinking, “I hate that they’re making this movie–they’ll ruin the book. Ruin it! They shouldn’t touch it! Sacrilege!” (While I kid…I’ve felt this way…and wanted to hug a book to my chest, snarling.)

2. Lost in translation. Not every book is very adaptable. In Ender’s Game, the kids were naked the whole time. (I’m glad they changed that for the movie, by the way.) But there are other aspects to things being lost in translation like the scope of the book is too huge. Trying to condense a seven hundred page book down to a two hour movie is nigh-on impossible. Not that I want any book to be cut into multiple money-grabbing sections. *side-eyes several major productions lately* But cramming in everything can’t happen. Events are condensed or changed. Characters are cut entirely.

Sometimes making the movie from the book would cost a fortune, and they’re just not willing to sink the budget into it. Books can be too big and grand to make the jump to a visual bite of plot and characters. Things are lost–which leads back to number one. How dare they?

Another aspect to this one is that inner dialogue mostly gets tossed aside–and reading emotion is not always the same as reading their thoughts. In some ways, if done right, the book and movie can feel like companion pieces in this…but it’s rarely done to accommodate this so that you feel like you know what the actor/actress is thinking at any given time. Elements like internal conflict are often lost in translation. Books make us feel and sometimes movies just make us watch things happen.

3. The author gets shivved by a screenwriter/producer/or director. I’m sorry, but it’s true. I was so relieved when I saw that Suzanne Collins was handling the film adaptation of The Hunger Games. I hate to see the vision of the author lost in the attempt to make the book something it’s not. This could be due to a loss in translation, but, also, I think those in charge of a movie often want to leave their mark on it too…and the author gets shivved. Suddenly, there are too many cooks in the kitchen and the creator of the plot gets relegated to a “based on a book by” role. Intentional or unintentional–the author’s concepts are scrapped–which is what was bought in the first place, and what audiences expect–and we’re back to point one and two…and incorporating three:

Readers expect films made of their favorite books to capture the full vision of the author as they, the readers, have imagined it.

Every other reason I can think of falls into one of these three categories and fits into the above, but tell me if you think there are other reasons book-to-film adaptations fail.

My top five THE MOVIE WAS BETTER:

1. Princess Bride-The obvious choice. You were probably thinking of it too.

2. How to Train Your Dragon-This book was written for an audience of 7-11 year old boys. I just kept shaking my head at some of the jokes that had my son rolling on the floor. Also, the movie was very, very, very loosely based.

3. The Little Mermaid-Nothing against Hans Christian Andersen, but having the mermaid princess end up in a lovely sea foam (not the color–actual sea foam) is a bit of a downer.

4. Hunger Games-Doh, I’m going to get hate-mail, but I liked the movie better because we didn’t climb inside Katniss’s head–which I’m sure is why some people hated it.

5. I Am Legend-Okay, I’m plausibly going to get hate on that too, but I liked both endings of the movie better than the book’s. *dons flame-retardant gear*

My top five THE MOVIE WAS EQUAL TO THE BOOK IN CONCEPT OR EXECUTION:

1. Holes-Dang, that was an incredible adaptation. *slow claps* Great book too, though.

2. Ella Enchanted-The book and movie are very different, and I like both of them. I thought the movie captured the quirkiness. (My sister felt the opposite–she felt like it ruined the book forever and ever, and she cursed their children’s children.)

3. Curious George-The cartoon was fun and adorable and perfect.

4. Beauty and the Beast-I know, Disney makes it all so sweet and so on, but having read both I thought this was well done. (I’m noticing a trend in my list… Hmm.)

5. Ender’s Game-Also, I’m sure, not universal agreement on this, but I think they did a good job with the adaptation.

*There have been quite a few classic adaptations including Shakespeare plays that I thought were equal too.*

1. Avalon High-This was a made-for-TV movie and…OY. I wanted to hug Meg Cabot and let her borrow my woobie after I saw this one. They actually changed the ending–like completely–like totally.

2. The Cat in the Hat-Shouldn’t have been done. End of story. Actually, Seuss should get an exempt card on adaptations. Leave that poor man alone.

3. The Haunting from the Haunting of Hill House-I thought the movie was interesting and campy until I read the book and then I felt very “how dare they?”

4. Harry Potter and the Prisoner of Azkaban-That was a travesty. My favorite book in the series turned into my least favorite movie in the series. And that werewolf? Honey, please. That wasn’t at all what a werewolf is supposed to look like. 😉

5. Eragon-My kids refuse to acknowledge the movie of this even exists.