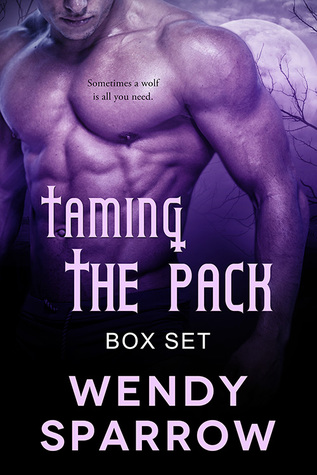 Sometimes a wolf is all you need.

What do you get when you mix Alphas and sheriffs and park rangers? Three sexy tales of wolf shifter romance from the talented Wendy Sparrow sure to keep you up past your bedtime! With one click, immerse yourself in a rich world of danger, intrigue, a little humor, and more than a little heat.

After a feline danderbomb takes Vanessa down, she wakes up naked in a cage staring at a hot park ranger who has no idea what he’d trapped. Dane Hansen had hoped to tame the silver wolf in his kennel, but all bets are off with the deliciously sweet Vanessa on two legs. They’re hot as a forest fire even before they scent-match. Meanwhile, Lycans are being poached, and Vanessa has been targeted. Dane will have to keep her close to protect her, but with Vanessa in heat and mad to mate, who will protect him?

This Weakness for You

Jordan Hill is his pack’s Alpha wolf, and after his last breakup, he’s opting to be the lone wolf, too. But when his rival’s little sister—a human—comes to his door, what should be a tasty snack turns out to be something more than Jordan could ever imagine. Christa Hansen is simply looking for a place to stay. Yet the dark shifter smells irresistibly like forever. But getting involved with the wolf who tried to kill her brother—twice—is lunacy. Falling for her family’s enemy won’t just be her downfall…it will be his, too.

Waking up with a naked woman holding a knife at his throat is just about the last thing Sheriff Travis Flynn expected. And the brother she’s looking for? A murderer. And dead. Probably. But the real shock comes when she insists she’s not a Lycan. Once LeAnn Wilcox finds her brother, she’ll get out of the pack’s territory and go back to her regular, nonfurry life. But LeAnn’s life is at stake if she won’t claim her place in the pack, especially once Travis’s control over the pack is challenged and her brother’s fate is questioned.