It’s been a while since I’ve posted anything I’ve been working on–other than the occasional tweets. I’ve been mostly working on things that are either in the process before or after submission–so I’m not supposed to post stuff from them.

Since I’m actually waiting on manuscripts somewhere in that process, I decided to work on something I’d been planning for quite a while: change my short story Push Me into a novel. It’s nice to work on something that is your own goal and part of your own plan. When I toss out worrying about marketability or what people in publishing will think of it, writing feels like a decadent indulgence for a bit. I like it. It’s freeing.

I might not even show anyone other than a few people who regularly beta for me and have asked to see it. I don’t know–I haven’t decided. I’m not sure if other writers feel this way but sometimes sending stuff out to be critiqued–even by professionals who like it–wears on me. It feels like even my thoughts are open to public interpretation.

But, then again, I’m psychotic, so there you go.

Here is the opening to Push Me. (It’s still in “draft” form and may get tidied up and reworded eventually.) Comments are welcome–as long as they’re flattering and you are yes-manning. (Do I get points for honesty?) 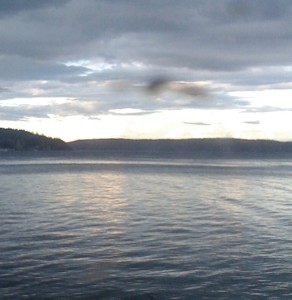 As she stared at the grey rowboat floating adrift off the shore of the steel grey lake with its early morning fog, Brenna measured the predominance of grey in her life. There was the small, but exactly organized office she was currently in with its grey walls. The government facility itself—its stacked-block, grey, concrete building marred the landscape like only government facilities can really achieve. There was her pin-striped grey business suit. While she looked good in it, and it offset her copper hair quite nicely, it was still grey. Grey. Grey. Grey. Even her car was the regulation nondescript grey.

Drab, very drab, Brenna. Who would have ever guessed you’d grow up to have such a drab, grey car and work for a secret government agency cloaked in the grey space on budgets and administration?

Then, there was him…and he wasn’t drab at all. His eyes were almost the same color grey as the lake right now—a sort of dark blue/green that somehow managed not to be either of those colors. His eyes were probably why he came to mind so instantly. Though it might be his white-grey hair, prematurely grey despite his age of thirty-one. They said it was stress, but if she’d ever seen Harris Dumont stressed out then he hid it really well.

Yet, he always seemed to appear when she was stressed out. They’d started meeting regularly when she was on a quick walk to clear her mind. If her walks were at all predictable, she’d think he was purposefully doing it. As it was, he was either incredibly lucky—or he could read her mind. His official file, of course, said it was the latter but, damn, how could he read it without being near her? He had to be the strongest telepath in the compound, and that should scare the crap out of her, but it didn’t.

Maybe this was the day that Barrett would come down on her and tell her to stop “seeing” a research subject. It was odd that he hadn’t already. He’d met them on walks a couple times and just walked off without saying anything. Technically, Harris wasn’t a patient of hers, so it didn’t offend her strong sense of principles and her need to follow protocol. Technically, he never would be—he was too sane—which made him more of an oddity here than his telepathy.

But, he wasn’t her patient. She’d finally asked to see his facility-wide file, knowing that when she did, it was opening up the perfect opportunity for Barrett to tell her to stay away from him. He hadn’t  He’d given her the file with a blank, unblinking look that creeped her out—and getting creeped out by anything new after a year here—well, that was significant. Why was the facility director allowing them to see each other?  They had to be on borrowed time. They had to be. Barrett didn’t even like her speaking with any of the other subjects outside of her required duties. Barrett always said it would complicate her ability to remain neutral.

Neutral. Grey. That was her life. The only bit of grey in her life that she wanted these days would eventually become off-limits. What would she do when they told her to stay away from Harris Dumont—her favorite grey?