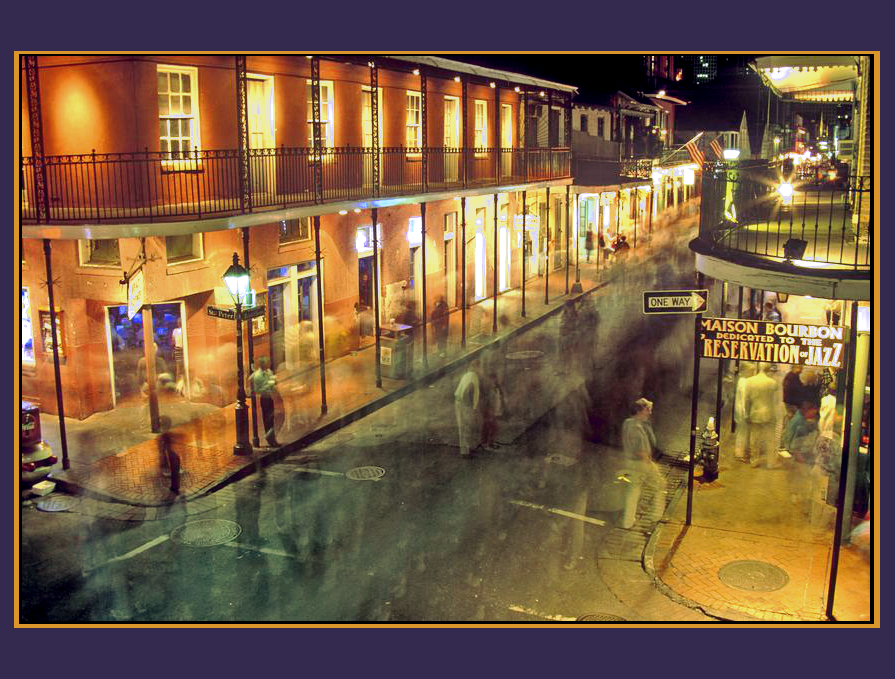 In the busy rush of today, I nearly skipped grabbing soup from the cafe near my allergist’s office. (A treat that I value in light of the fact that I’m sick of allergy shots.) Then, I saw they had Jambalaya. I can’t eat Jambalaya without thinking of New Orleans…and thus I can’t pass up a chance at Jambalaya. Few places call to my soul like New Orleans–despite that fact that I don’t drink, I’m a conservative Christian, and when I last went there we got off Bourbon Street at 10 p.m. (which is when it gets interesting for most people.)

The reason I love New Orleans so much is because the streets all have stories. The culture is so reflected in everything from the people to the buildings. I find the city fascinating. Subsequently, I’ll read nearly any novel set in New Orleans that I can get my hands on, and I won’t lie, they get an extra star for the setting. The worst book set in New Orleans would get two stars. Well, probably. If you ruin a book set in New Orleans, there is something seriously wrong with you as an author. Take down your shingle and go home.

Having said that…I doubt I’ll ever write a book set in New Orleans because I couldn’t do it right, and I need to do a place like that right. It’s also why I’d love to write a historical set in England, but I just couldn’t do it justice. I want to get the details down to the letter, and give the culture the depth it deserves.

I’ve been lucky in my life that my father was in the military, and we moved a lot (though if you asked me growing up–I hated this too.) We lived a lot of places: Florida, California, Las Vegas, France, and Utah. We visited other places on vacations, and I traveled some with my work when I managed an optical. Then, my husband and I moved up to the Pacific Northwest, and we’ve traveled with the kids or on my husband’s work trips. I haven’t been outside of North America since I was a child unfortunately, but I’ve been all over this continent.

Nothing could better prepare a writer in my opinion. I’m the sum of my experiences–some bad, some good, and some just plain weird. I picked up a southern accent at one point in Florida, and I used to catch crabs off a pier I could walk to when I was a kid. I went to high school in one of the most violent schools in Vegas, and I fell in love there for the first time. I spent a few days in Montana…and was stunned by the stillness of it. I’ve had Chinese food in Vancouver in a place where they gave us an amused look before giving us forks despite our protests. I’ve been on gorgeous beaches  in the Keys where I fell asleep on a towel on a balmy breezy day under a swaying palm tree, and then I’ve explored tide pools on the rocky coast of Washington. The Alamo. Yellowstone. New York. Washington D.C. Death Valley. Mt. Rushmore. Honolulu. Every place has a story–and I’ve always wanted to find that story.

I’ve used my knowledge of these places to write fiction set there, but it’s not enough…it’s never enough–especially for someone with a bad memory. I have a better memory of how I felt when I was there than the actual details. I usually troll Google when I’m writing, looking for everything and anything about locations I write about. I look at people’s vacation photos. I watch their YouTube videos. I comb Wikipedia. I pull up Google streetview and stand on the streetcorners and spin in circles.  Last week, I spent quite some time figuring out how long it would take to drive from one place to another. I might have lived somewhere, but I feel like I need to live and breathe an area before I can write about it. I need to be there, sitting on the ground, with my laptop on my lap in order to write it–or at least feel that way. I don’t know that I always succeed, but I always try.

So far, of what I’ve published:

Frosted is set in Denver, Colorado.

The Teacher’s Vet is set in Western Washington (based on where I live now actually.) (I pray that my kids’ teachers never read this novella because some explaining might be in order.) (I love you all…not based on real people, guys.) (Okay…maybe some.)

Stealing Time is set in a lodge somewhere in Idaho.

Cursed by Cupid is set in Portland, Oregon.

I’ll have a short story out later this month in an anthology set in distant space. (To be clear, I’ve never ventured beyond the Earth…I made up some details.) (Google Earth failed me as you might imagine.)

This summer, I’ll have a paranormal suspense novel out set in northern Western Washington…and this winter I should have a follow-up novella to Stealing Time out–partly set at the lodge in Idaho.

Like I said, I won’t swear I always get it right, but I try so very hard.

The setting of a story is one of the most important elements of it. The setting is a background character that can make or break it. Whether it’s a completely fictional world with castles and trolls or busy, modern-day New York, if the setting doesn’t come alive then the story will always feel shallow. It’s the difference between an escape to New Orleans and sitting down in a cafe open to Bourbon street with Jambalaya in front of you and Jazz in the air…to a mediocre postcard with a Wish You Were Here. Reading or writing, I need to believe that I am there.

So, what about you? What calls to your soul? What book setting is almost an auto-buy? Where would you go tomorrow if someone handed you a ticket and an escape from your life? (Which is basically what a good book is…isn’t it?)