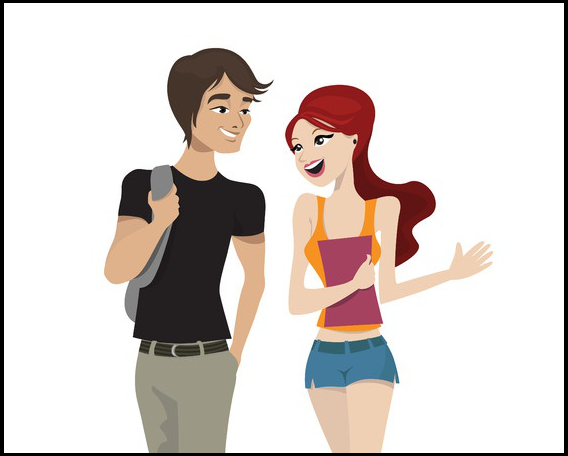 I know…it sounds exactly opposite of what you should do, so I’ll start off with dialogue from an actual car conversation I had with my son yesterday that’ll make you feel like a Mensa candidate in comparison. (I’ve substituted out initials for names, by the way.)

Me: “Wait…who was that supposed to be? Your aunt?” (On a side note, have you ever noticed how mocking mimicry sounds nothing like the person we’re doing an impression of? My dialogue mimicry of my husband is utterly stupid-sounding if I stop and think about it.)

Me: “Dude, is this about the milkshakes?”

T: “Yes, because she said there wasn’t any left, but there….”

Me: “Wait. Okay, so, here’s what happened. So, your cousin came up and was all, ‘Let’s have milkshakes.’ And he was going to make some, but he didn’t. Then, A came up and was like, ‘I’ll make some,’ but she only made enough for herself and B. So, then, your aunt was….” *changes lanes* “Geez! What the…what was that about? That idiot is like all over the road. And…what was I saying? Oh, right, so your aunt was all, ‘Why didn’t you make enough for everyone?’ And A was all…like, ‘Nobody told me to.’ So, your aunt went over there…because she was being nice.” *gives T a significant look* “And your aunt was all, ‘Wait, what happened to the rest of the ice cream?’ And then A was all like, ‘That’s all there was.’ So, you know, umm….” *turns to look over shoulder while making a lane change* “And…so…yeah. So that’s what happened. So, it’s not like she was like totally holding out on you. Besides, we’ll eat when we uhhh….” *Passes cop car* *rubbernecks a bit* “I wonder what…anyway…well, we’ll eat when we get….” *sighs* “Besides, dude, it’s not like you needed more ice cream.”

If that doesn’t make your eyes bleed, then I think there might be something wrong with you. And you can mock and point and get up onto a pedestal of proper grammar and witty repartee…but I challenge you to listen to yourself when you’re chatting with friends or family.

You might have an IQ of 150, but I contend you’d sound like an idiot if you recorded a casual conversation.

As authors, we’re encouraged to listen in on conversations to get a feel for real dialogue. Because we want our dialogue to be realistic, right?

No. We don’t. I like to think of good dialogue as being realistic…only better.

Things you’ll find in real dialogue that should be cut from fictional dialogue:

1. Filler words: like, so, yeah, all, just, well, anyway, etc. You can see in my example that I abuse “like” to ludicrous levels. And I’ve TRIED to stop, but I can’t seem to.

2. Frequent hesitation sounds: uhh, umm, mmm. Some use may be proper for mood and characterization, but keep it slight.

3. Unnecessary adverbs: totally, actually, basically, suddenly, etc. I overuse ‘actually’ actually. I know this because both my kids overuse ‘actually.’ It’s horrific. Whatever you overuse, your children will magnify to make it every other word. True story.

4. Vague pronouns or overusing names. Repetition in speech looks just plain dumb in dialogue. And most listeners will guess at vague pronouns in context, but it’s more crucial in writing to have clarity.

5. Giving no context. The closer you are to someone, the more likely you are to jump around without context in speech. My sisters and I can sit down and bounce from subject to subject with no more context than: “You know that one time with the garbage bags and the rain when we lived….” and we’ll all laugh. And our spouses will stare at us like we’ve grown extra heads. This would drive a reader nuts.

6. Incomplete thoughts. To some degree, you can get away with this, but only if it contributes in some way to characterization or mood. But it should be used sparingly.

7.  Long explanations. Someone once told me that typically in dialogue you don’t want more than what someone can say in one breath. I think shorter bits of speech seem more natural typically in fiction…even if they’re not always that way in real life.

8. Pointless dialogue. The above conversation was fairly dull. And our lives are made up of dull conversations. My son has asked me twenty times today alone to make him food–he’s eleven and has a bottomless pit for a stomach. Good fiction is reality…without all the boring parts.

9. Breaks or tangents in dialogue due to inattention and action. If you want to maintain any sort of flow and momentum…you shouldn’t have your characters stop to notice the world and ponder its meaning frequently.

10. Characters interrupting each other unnecessarily. My mom taught me to be polite. I swear. But you’d never guess it from how often I interrupt in conversations. I try to stop, but I still do it. All the time. *hangs head*

11. Overusing slang that dates dialogue: Dude, geez, cool, tight, awesome, etc. If you’re writing contemporary, use slang with a light hand. I will admit that actual profanity seems fairly timeless, but, well, anyway…. My son can use the word ‘dude’ eighty times in a single sentence. It’s so disturbing. But any slang you use can potentially date your dialogue so that five years from when you wrote it–it sounds like historical fiction, or it reads like eighties pre-cellphone suspense where characters are in constant danger that makes us snuggle our technology and roll our eyes.

So, there’s my list of things that are found in everyday dialogue that you should protect your fictional dialogue from. If you can cut these things, it’ll tighten up your dialogue nicely. So, what do you think? I’m sure you have other things on your list…or you can agree with me that I sound dim-witted in the conversation above. (Hey, seriously, listen to your own conversations this week–you are not as fabulous as you might think. Okay, maybe you are….)