Home » AmWriting » Re: Writing Romance is so Easy

Re: Writing Romance is so Easy 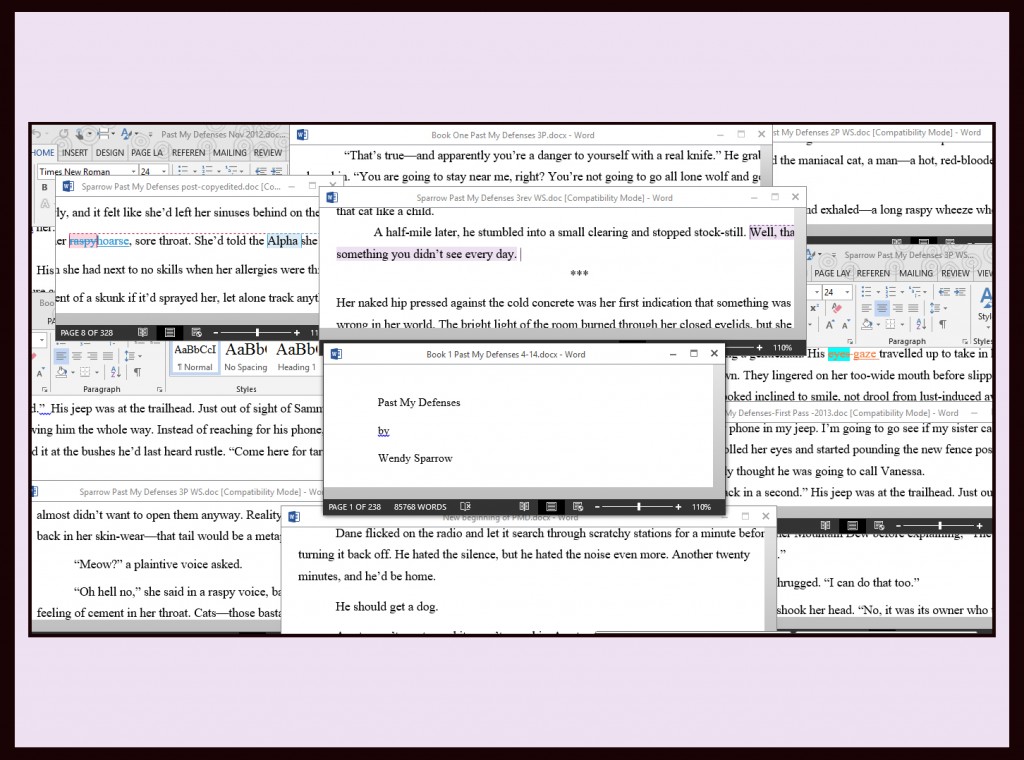 Every few days in the social media community it seems there’s another article somewhere about how writing romance is paint-by-numbers, has no character development, takes very little research, and can be accomplished in an afternoon by a bored, undersexed housewife who’s read a few bodice rippers and has a passing knowledge of the English language. Supposedly, we rely heavily on sex scenes to turn the pages and we’re appealing to the flip side of the human spectrum to those who like popcorn action flicks with helicopters blowing up. Our audience likes to be titillated for a few hours and then to toss it on the stack and forget it. Mindless entertainment to be devoured with bon-bons at the ready. Why should readers pay more than 99 cents for that? Heck, why pay at all? Plenty of pirating sites out there, right? And it’s just romance after all…it was written in a couple of hours and slapped on Amazon after a run through grammar check…maybe.

Typically these cutting articles are written by those who only read “literary fiction” or, even worse, by someone who typically writes literary fiction or “women’s fiction” but decided to include romance to show these plebeian category romance writers how it’s done. They climb into our sandbox, kick sand in our eyes, and say, “You’ve never seen a sandcastle like this! It’ll have walls! And look, I’m making a moat…you idiots have never seen a moat before. Plus, I’ve read a few books about castles so, naturally, I’m better. Watch and learn!” They brag that they won’t use the tired old euphemisms that we all use or were used back in the 80s anyway. No heaving bosoms here! No way. They’ve reinvented the English language and romance and so on and so forth.

Romance authors and readers used to respond. We don’t so much anymore. These articles are far more commonplace than heaving bosoms in the romance world and insult both the readers and writers of romance.

I’m still not going to bother to respond. I’m simply going to post my experience…which may or may not be typical of other romance writers.

Up above are the thirteen major drafts that Past My Defenses went through. I’m not sure if you can see them all. It was hard to cram them all into one picture. I’ll admit, I draft super, super fast. So my zero draft (the step before a rough draft) took around two weeks. Two weeks of writing at least 10-12 hours a day. Intermixed with that was several hours a day of research. I watched videos of wolves, read articles, and then studied the area I wanted my series set. I charted out the scenes to confirm I had a full three act story with major pivotal moments. I charted out my character’s development…their hero’s journey. Since Past My Defenses had an allergic shifter in it, I expanded my already-too-broad knowledge of allergies. Guns came into play so I researched which guns, their specs, and watched tutorials on various aspects. My hero is with the forestry department so I did a ton of research into that. So much research.

After the zero draft was completed, I did another pass of it. My characters had evolved and I need them to be consistent. I had a first draft…but I’m picky. I ran through it again and again before I sent it out to betas because I need it perfect. That accounted for several revisions of varying depths. Finally, I sent it out…and was sick to my stomach while waiting to hear back. I thought it was good. Was it good? Was it funny? Beta readers sent feedback. I did another revision. I sent it to my agent. My agent sent me feedback. I did another revision. It was submitted for acquisition. I was sick with stress again while waiting to hear back. I was crabby. I was horrible. I ate all the Oreos in the world and binge-drank Mountain Dew. I was already writing something else to keep my mind off it. It was acquired by a publishing house.

Entangled has an extremely rigorous editing process. The first pass with them cut deep. Major revision. A lot of writers when they get that first editorial letter–they sit on it for a bit, possibly not even opening it. They’re brutal…even with nice editors which mine was. The red pen bled all over the page…uh…screen basically. I think it took me at least a month to work through that.

Then, there was another pass with the editor and another revision. That took quite a while too. I dragged it on vacation with me and had a working vacation. For third pass, it went to someone new and then it went through another revision. That one I turned around while at Disneyland. I worked on it at night when everyone else was sleeping because I was on deadline.

The manuscript hit copyediting…and you’d think, by now, we’d have found all the typos and mistakes. Copyediting makes you rethink that you ever knew how to write. Words lose all meaning as you discover you never knew their real meaning. Every time I said “bicep” I actually meant “biceps” even if it looked wrong. Do I go with common usage or grammatically correct? Another revision and a huge blow to my self-esteem. Then there’s the galley-proofing. There should be NO mistakes. There are still mistakes. And you know if you don’t find them, some reader will and will needle you about it. It’s been read by a room full of people and typo gremlins squeak through.

Finally, it’s out. So, we can quit, right? The book will sell itself?

Ugh. The hardest part for me is the damage to my dignity post-release. There’s the begging for reviews, the guest posts that I enjoy but are a lot of work, the selling of your soul via promo on social media. You question whether you’ll have any friends by the end of the first week. You invest in giveaways and ads and you invest your heart in it. Reviews start coming in…hopefully…you refresh and refresh hoping people have read your book. Did you like it? Did you like me? Am I enough? Many writers are introverts and we have to fake being extroverts. It costs. It drains us. It affects our health and our families. Release weeks are high highs and low lows.

Meanwhile, I was also neck deep in book two–This Weakness for You. I was revising it and researching it. The heroine in that one has multiple sclerosis so I was on every site I could find to make sure I did right by that community. The stress on your health and sanity is intense. The pressure to write more and sell more simultaneously is significant. You’re expected to do everything and be everywhere…and still find time to write.

Eventually the reviews slow down and your book hits pirating sites…and your Amazon ranking climbs. But you’ve got another book to concentrate on because the market is busy and romances have a short shelf life.

For a good lot of romance writers, this isn’t a cute little hobby. It’s our career. We put in forty hour weeks and never make minimum wage…we might not even pay for our output. The sales from books are split among editors, publicists, publishing houses, agents, writers, and, of course, retail sites. When you see us on social media, we’re not goofing off…okay, well, sometimes, but we’re also building relationships that are vital these days in a saturated market. Or maybe we’re on a break from a rough day where the writing didn’t go well or we got a lousy review or we read another article about how romance writing is basically Mad Lib. Social media is a way for us to be among friends. It’s working and it’s playing for most of us.

We also read romance…both for fun and to watch the market. We read old and new. We read nonfiction and other fiction. We respect those who came before us and try to help those around us and who’ll come after us. And we read online articles that suggest we’re sitting around counting our money and typing a few lines now and then rich with anatomy metaphors and euphemisms. And it hurts. “If you prick us do we not bleed?” (See, both Shakespeare and the single anatomy slang in this whole post.) (Other than the bosom references, I’ll cop to those too.)

The primary goal of the human existence for most…the thing we’re searching for is love. Most of us want to love and be loved. Romance reflects that need and deserves respect. Those of us who make a career out of writing it would love not to be sneered at by those who get in our sandbox. There are no new stories under the sun. There is the storytelling…the journey…and the desire to connect with someone else by sharing that. And it’s many things, but, for me, it’s never been easy.