Secrets of Skin and Stone’s Cover

Earlier this week, my YA paranormal debut had a cover release on YA Books Central, but for those who haven’t seen it, it’s gorgeous and needs to be seen. 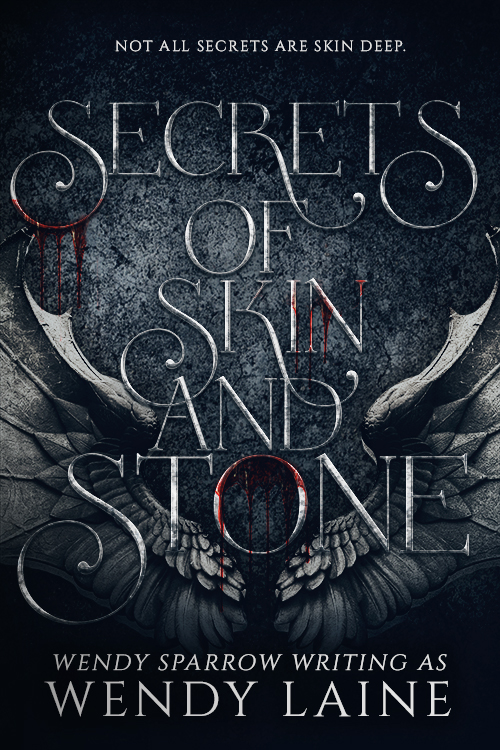 What I love about this cover is that the idea of gargoyle comes across but so does the gothic tone to the book. The font is just amazing–it feels 3D and yet elegant. For those who don’t know why the title is that, this is the book with Piper, who has OCD and is a cutter. Gris is a Watcher, a guy who can turn into a gargoyle-like creature and hunt fiends.

Something is wrong in Hidden Creek. The sleepy Alabama town is more haunted than any place fiend hunter Grisham Caso has ever seen. Unearthed graves, curse bags, and spilled blood all point to an evil that could destroy his gargoyle birthright. The town isn’t safe for anyone, and everyone says fiery Piper Devon knows why.

Piper wants to leave Hidden Creek behind. She’s had enough of secrets—they hide in the shadows of her room and tell her terrible things are coming. Too-charming city boy Grisham might be her only chance to save herself.

To survive, Piper and Grisham have to shed their secrets and depend only on each other. But what lurks in Hidden Creek still might take everything away from them, including each other.

Secrets of Skin and Stone is available for pre-order and is up on Goodreads.

This book is important to me. Piper is important. If you’ve hopped around this site, you’ve seen how many blog posts I’ve written about OCD. Most of my books, I see as an entertaining way for readers to spend an afternoon. This is different. I would have given anything as a teen to see OCD normalized…to see my type of OCD. I thought I was going mad because Pure-O doesn’t have most of the stereotypical symptoms. I considered suicide to escape my OCD symptoms. Normalizing and discussing mental illness and self-harm is something I feel passionate about.

I’m an introvert. I have to work up the nerve to make phone calls to family members. The first post on here about OCD left me shaking and sick for days. Stepping out into the light isn’t just important–it’s vital or I wouldn’t do it. My daughter has OCD…and she will not ever consider suicide to escape it.

I would like for this book to get into the hands of someone who might need it. There are two other books following this one–but they’re tabled until we know how this one will do. I would love to see those finish the story–Piper’s story. I would also love to be able to talk about mental illness with more people, but, sometimes, okay, most of the time, I suck at promo. Often, I’m too shy or too exhausted to put myself out there. If you could help me, I would appreciate it. I’ve written over two dozen emotionally draining posts on OCD…because of this.

Some of the upcoming happenings related to this or ways you can help:

As I said, it’s available for pre-order now and can be put on your shelves on Goodreads. You can also request your local library order ebook copies. Paperbacks are available in a POD program through Createspace–so they’re higher-priced, but can be found on Amazon also.

I’ll also be doing a blog tour with YAReads around the time it’s available–if you’re a blogger who’d like to help out with that, here’s their sign-up on Google Docs. Or, if you’d like me to hop on your blog and discuss anything related to this book, disability, mental illness, diversity in literature, romance, gargoyles, or anything really…contact me and I will do it.

If you’re a reviewer, I might be able to hook you up with an ARC so you can review it.

There will also be giveaways to participate in and I’ll be tweeting and posting on Facebook about the process and book. If you could help by retweeting or sharing, I would be so grateful. My Twitter handle for that pen name is @WendyLaineYA but I’ll probably cross-post in both accounts since one has so many more followers.

If you’re not up for any of that, thinking good thoughts on my behalf would be enough…because I’m terrified about how a book with cutting scenes will be received. This is me, standing out in the open, talking about something I once hid from everyone in the entire world. Every now and again, I think, “What have I done?” I’m scared, guys. Social media can be wonderfully supporting…or distant and aggressive in attacks. There’s often a degree of separation online where we feel okay dismissing others’ feelings because they’re images on a screen. This could be awesome…or so bad. But it’ll be fine. Probably. Maybe. Phew. I can handle this. I can do it. I hope.

Anyway, this is a bit heavy for a cover reveal, but we’ve probably known each other a while. *fist bumps* Thanks for being in my corner.

Here are all the associated links with it: